“And in the same region there were shepherds out in the field, keeping watch over their flock by night. And an angel of the Lord appeared to them.” —Luke 2:8-9a

Santa is not very inclusive—he only brings gifts for good boys and girls. He even puts you on the naughty list if you’ve been behaving badly. Those who receive presents from Santa are children most qualified to receive them. The Lord Jesus, by contrast, gives the greatest gift to those who are the least qualified to receive it. He came to earth to grant eternal life to undeserving sinners.

The mission of Christ to save the least likely people is seen in the fact that shepherds were the first to hear the good news of His coming. The advent of Jesus was not announced to kings or emperors, but to some of the most insignificant persons in Judean society. Although shepherds were important, the culture viewed them as minuscule. In fact, they couldn’t even testify in court. Yet, an angel of the Lord appeared to them and they became the first recipients of the news that the Savior had been born.

The Gospels reinforce the idea that He cares for the low-ranking people of the world. The first disciples were fishermen. The kind of people He healed were lepers, paralytics, and those possessed by demons. He ate with tax collectors and sinners. He cared for widows and the sexually immoral. Jesus came for the least qualified—as He Himself said, “I have not come to call the righteous, but sinners to repentance” (Luke 5:32).

The good news of Jesus is for you, too. You don’t have to be outstandingly qualified to receive His gift of eternal life. The Lord Jesus will grant salvation to you, no matter who you are or what you have done. By repentance and faith (Acts 17:30; Eph. 2:8-9), eternal life can be yours even if you are sexually immoral, idolatrous, adulterous, greedy, or addicted (1 Cor. 6:9-11). Jesus is a significant Savior who came for insignificant people—that’s another reason why Jesus is better than Santa. 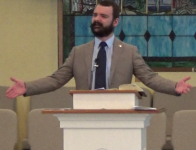